(En español? haz click aquí)
This is not a movie or film review. I just want to share my excitement about #Ex_Machina (2015) Character Design and the first of some entries touching the Machine vs Mankind epic and how have inspired me in my artwork. Maybe we will talk about Asimov and #Autómata in future entries.

I started drawing hybrids of humans with mechanic parts (or bionics) in 2000. I always felt fascination for the movies dealing with futuristic machines, so I guess it was only natural I ended up including bio-mechanics in my drawings. I have however a different style quite anachronistic on purpose, but I’ll explain that later on.

The Seductive robot – #Ex_Machina
One common portrait of future humanoid robots with A.I. is a replica of a human being with human skin and clothing, no mechanical evidence exposed. Yes, I do understand is all about the story the Director wants to tell, but I cannot avoid the boredom when I set myself to see a movie about robots and I end up watching just few minutes or none of robotic design and bio-mechanics. No matter how intense and interesting the philosophical or ethical debate of the movie contains, if you mention “robot” or “android” in your promotion some people would like to see some serious thoughtful bio-mechanic design not only actors behaving cold, moving clunky and feeling aloof.

This is of course until you see Ex_Machina trailer.

Ex_Machina is a psychological thriller focused in AI and its ethics that does not avoid a robotic design challenge. The brilliant design solution for AVA the humanoid robot is as good as any blockbuster movie. AVA design balanced human and bio-mechanic design beauty.

They didn’t avoid to exposed her mechanic structure and skeleton yet keeping her with a very feminine human silhouette. Director Alex Garland explained how her skin wanted to simulate a “spiderweb mesh” surface which I find very innovative and subtle. AVA design was developed by the renowned Concept Artists Jock  and also Concept Artist and Illustrator Karl Simon.

I see the design of AVA relevant as a source of inspiration specially for the exposure of their mechanic self. The skeleton celebration and bio-mechanics exposure is fundamental to me, yet different to AVA design, I make the case of exaggerate with old fashion joints, nuts and bolts because I like the contrast of putting together two concepts like Bionic beings with an old rusty screwdriver. One of my characters of The Journey Project (2008) for example, shows a humanoid being in a silhouette frame like AVA but with some exaggerated joints because I do like people to feel a bit uncomfortable or disturbed by the idea of a proportioned yet weird skeleton. 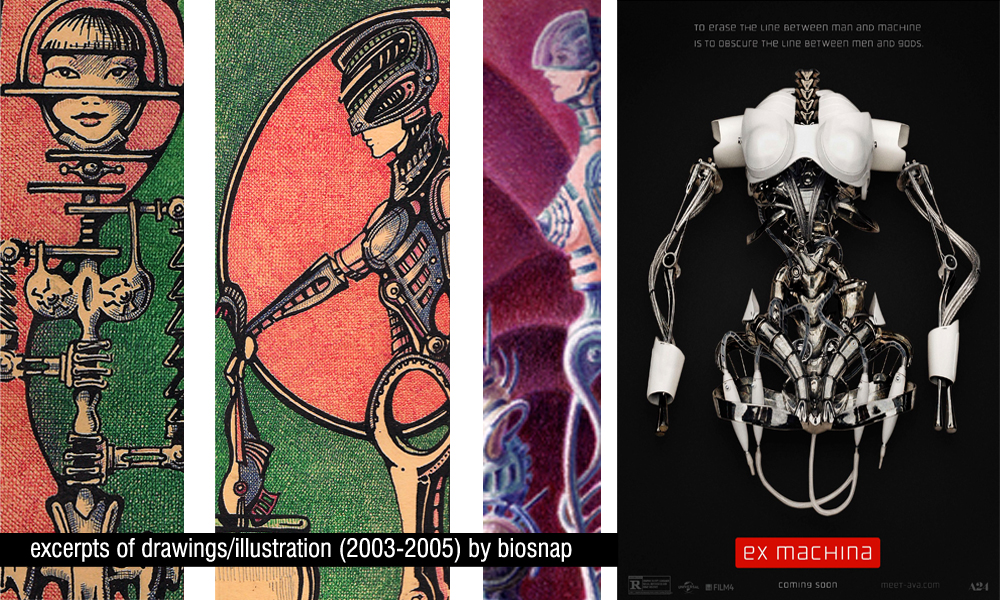 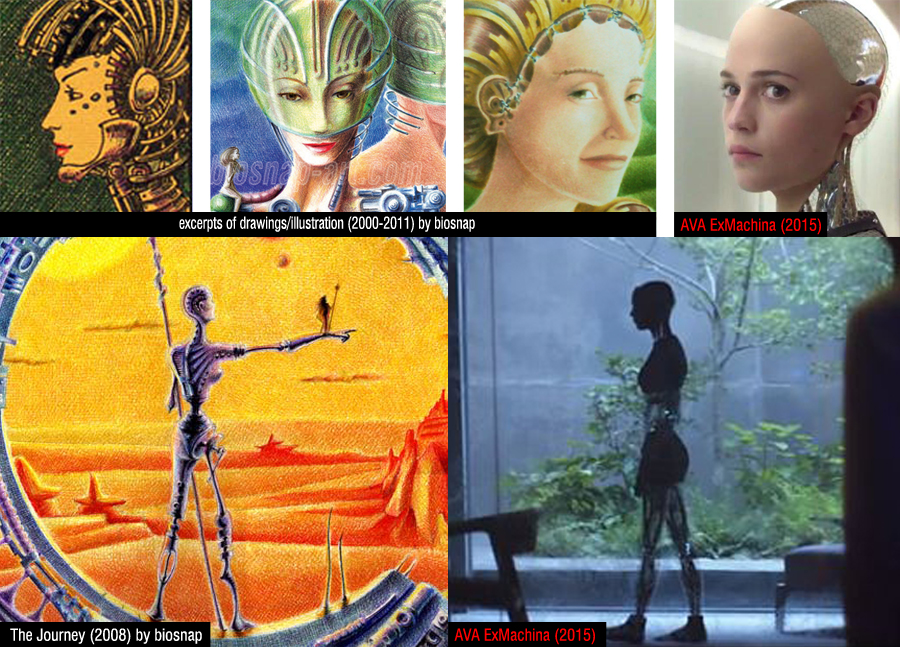 I will watch this movie with absolute enthusiasm and I am sure will set a new way to approach the aesthetics of humanoid robots in Pop Culture and movies. In the meantime I promise you new posts about this topic and new artwork (I’ve being in pause) touching this issues I love so much.